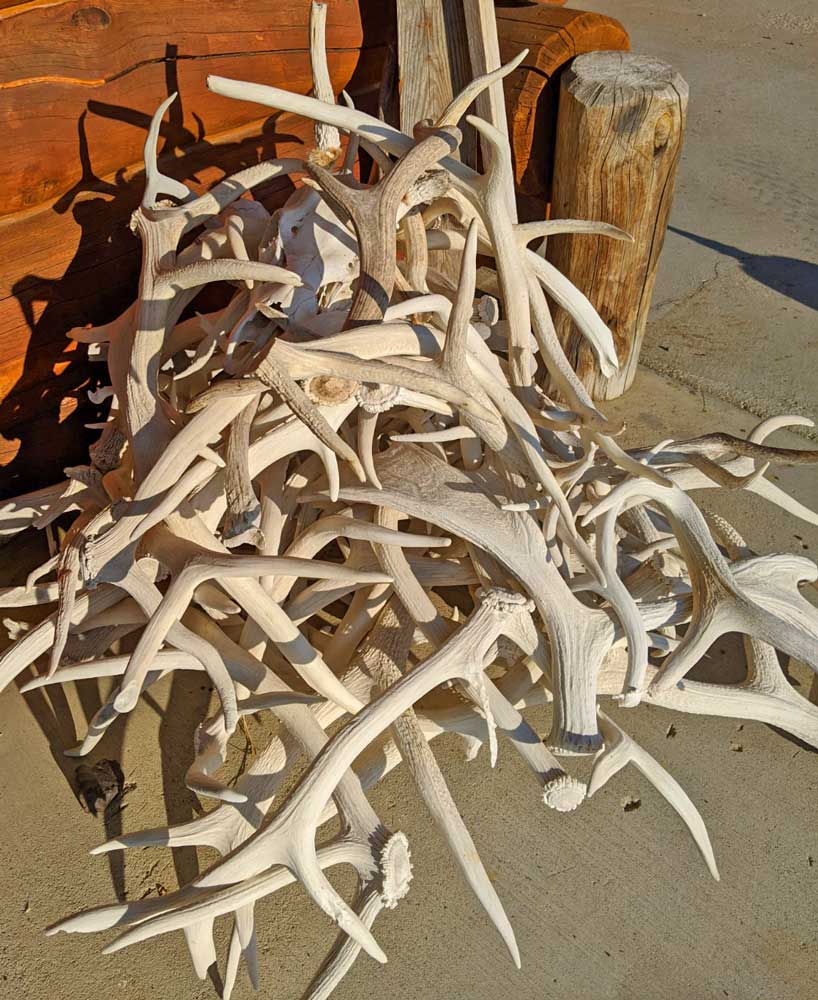 Spring in Montana brings many wonderful surprises, and with the lowering of the Yellowstone River, Anine and I yearn to start our endless searching for truly premium Montana Moss Agates.

Our search for agates this year was expanded to the islands created with the lowering Yellowstone River in the Glendive area. Our agate search was moderately successful until we found what we thought would be a beautiful agate (rock in center below, cracked end). 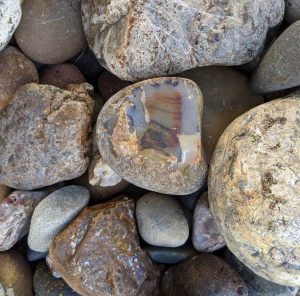 A few days passed before we could cut the agate to see if what we expected, an agate that would be a genuinely prized piece of agate, was hiding inside the rough container. Our anticipation was high with the first cut, and then with each successive slab of agate. Unfortunately, there were cracks in the agate, but we felt there was a special calling for this unique piece of agate. Each slab of agate was placed in the window in front of the cab machine so we could see it every day. 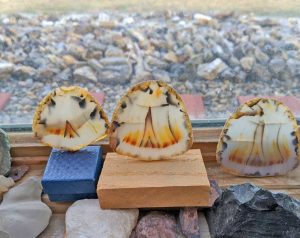 As each day passed, my mind churned as to how to use this unique agate, the design looked like a “tepee,” so I felt we should honor the early residents of Montana, the Native Americans – but how?

Another group of early residents of the prairie was all the wildlife, especially the elk that have since moved off the prairie to the mountains. The agate and elk horn button design started to form in my mind. A tepee agate in an elk horn button. Shed antlers are prized finds in western Montana, and we have a friend who has spent hundreds of hours searching for those very horns. These Montana finds were destined to be united to depict a stunning scene from the past. 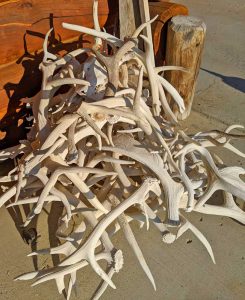 The “button” of the elk antler is where it grows out of the elk’s head.  I needed a special, large button to feature this Montana Moss Agate and to honor Montana ancestors. After a lengthy search, we found the perfect specimen to unite with the tepee agate. 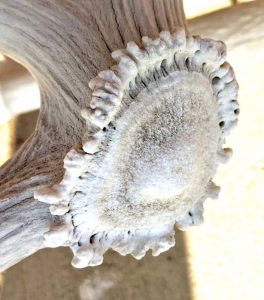 This process took on a life of its own. The button was cut off and the agate cut to fit inside the button. The agate fractures (breaks) did not pose a problem other than they created an uneven edge which was perfect. I outlined the agate design on the button and drilled out a 2mm deep hole to set the agate in the center of the elk button.

As I was working in the rock studio on this agate custom jewelry, my sister-in-law called asking me to help her. She had a huge rattlesnake in her flower bed – and she is deathly afraid of snakes. On this day, I became a snake hunter! I pulled the rattlesnake out of the flower bed with a long-handled shepherd’s hook, threw it in the driveway, grabbed my 20g. shotgun and dispatched the snake. The rattlesnake had a very big rattle: “13-button!” That’s HUGE! That was only the first rattlesnake of the day… I returned home and while walking across my yard, low and behold there was another large rattlesnake. This one did not need to be moved, just dispatched. Mine had an 11-button rattle. As rattlesnakes are part of the prairie I started wondering if I could incorporate one of the rattles in my “Honoring Montana Heritage.”

The tepee Montana Moss Agate was ready to be set. Now how to add a rattle snake button to the agate/elk button. I had read about hydro-dipping so away I went with creativity abounding.

I wanted to bring bright color to this piece, which would enhance the final appearance – turquoise trading beads came to mind, so I decided to dip the rattlesnake rattle in turquoise paint. I ordered some pre-drilled turquoise beads and deer leather strips for my one-of-a-kind custom jewelry necklace. More holes were drilled in the elk button to hang the rattlesnake button, a sterling silver bail was mounted on the top for the leather necklace. The pendant was finally completed. Oh my goodness! I need earrings to match. 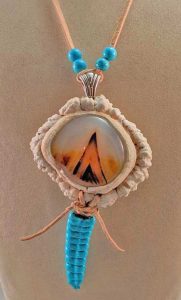 Return next week to see what we came up with the for matching agate earrings. 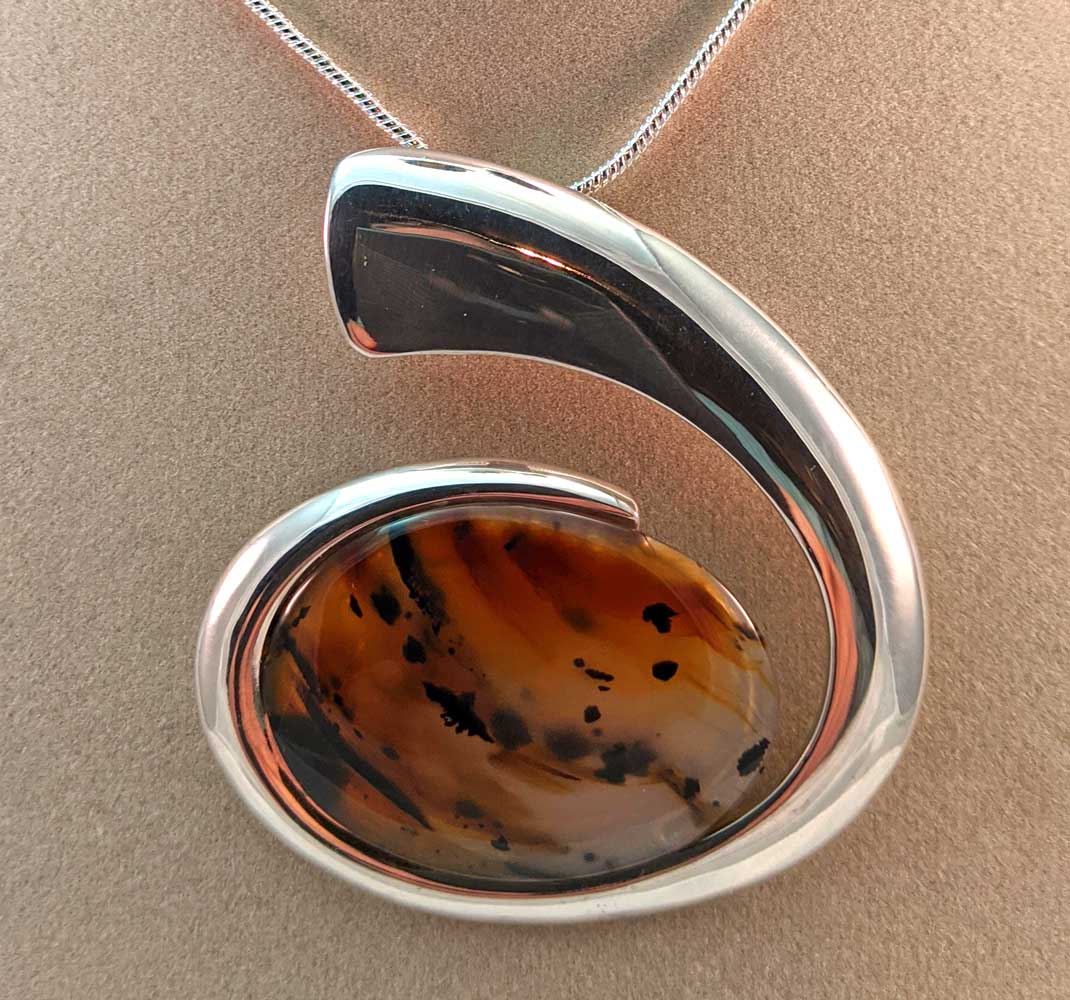 Welcome to the new Sisterly Creations blog. We’ve just finished setting it up, but come back often and check for new photos and articles about all things regarding our jewelry, our never ending search for stones, events and more. 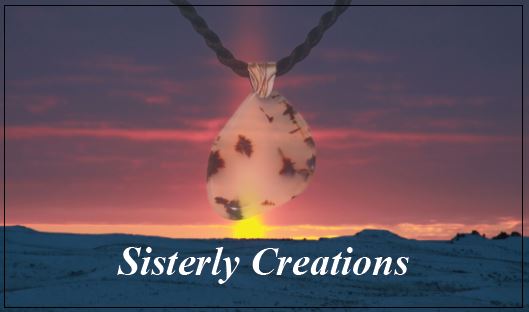